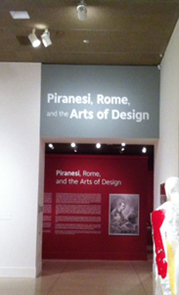 Whether or not you get the chance to see the exhibit, Piranesi, Rome, and the Arts of Design, currently at the San Diego Museum of Art through July 7, another review of this designer’s work may help you appreciate the approach one can take to a particular subject. The exhibit, conceived by Michele De Lucchi, an acclaimed architect, is beautifully displayed chronologically, showing prints, etchings, elevations and ending with contemporary models based on Giovanni Piranesi’s drawings as well as a series of photographs which contrast the settings of select architectural renderings.

I found the “3D” film, directed by Grégoire Dupond, based on Piranesi’s famous The Imaginary Prisons prints to be a great example of camera mapping and animation commonly used in films (Dupond builds from 16 different etchings that are combined into a singular continuos scene). Although a bit dark and forlorn, this animation offers an amazing and unique alternative to viewing Piranesi’s capriccio style. The etchings used in the film are to either side of the screen. Also note the squeaking, planked floor of the temporary theater. A nice compliment to Piranesi’s theme at hand.

You will easily see how influential his works were with contemporaries such as Escher and Dali, including the impact The Drawbridge had with J.K. Rowling’s approach to the (moving) staircases in Harry Potter.

So, for those who may not get the chance to visit, you can at least get a taste of the exhibit by viewing that great short film here: http://vimeo.com/14922087 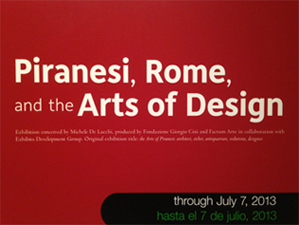