Neil Shigley is an instructor at SDSU and he managed to get sponsorship through the Suzy Spafford Scholarship fund to have Mark Ulriksen come out and talk. He plans to try to get two top-notch illustrators to speak each year.

Mark Ulriksen was the speaker on April 10th. Mark’s work is very unique and playful, and you can tell it’s his a mile away. He uses mainly gouache, but still experiments with different media like oil and tempera, just to mix it up. He’s not a fan of watercolor. He used to be a graphic designer, so he takes a little bit of that sensibility into his illustrations. He spoke about borrowing layouts from famous paintings and photographs, even movie stills. He likes letterforms, so he will sometimes make his figures and layouts look like letter forms.

To keep things interesting he adds different people and things going on in the background of his paintings that amuse him, stuff that some people might not even see. For instance, he was commissioned to do a painting of 1998. He used the World Cup soccer win as the main focus, but in the background showed all the famous people that had died that year, along with president Clinton and Monica Lewinsky putting her hand in his pants.

Kaiser hospital had been buying his dog paintings for artwork around the hospital and asked about getting the soccer picture. They didn’t even see Clinton in the background. He suggested that might not be a good fit.

He also does commissioned portraits of people as well as dogs.

At the beginning of his talk he said, “Follow your bliss.” He likes baseball and dogs, so that’s what he paints. He seems to be very happy, so it looks like it’s working.

For more examples of Mark’s work go to http://www.markulriksen.com/index.html 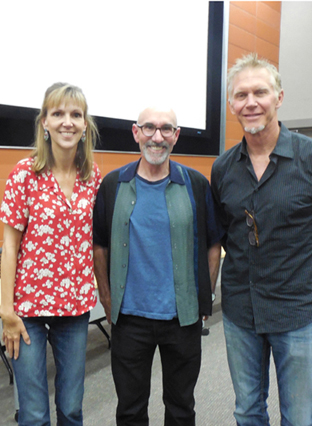