13 Tips on How to Get Published

For 52 years, the Society of Illustrators Los Angeles (SILA) has put on a great annual show exhibiting experienced and up-and-coming illustrators. This year’s SILA Illustration West 52 was no exception and a wonderful demonstration that this art form is still going strong. My daughter, April, entered an illustration for the first time and was accepted! Attending opening night with her, I could see April was a bit shocked at the level of talent being exhibited. The last art show she was in was in high school, and while they were very talented at her school, it was nothing like the level of this show. For a look at all the illustrations go to http://illustrationwest.org/52/.

There were entrants from as far away as France, with Matthieu Forichon’s beautiful untitled piece, and then there was the stunning, huge piece, “Irina in Hollywood,” by Jeff Wack. One of my favorites was right next to April’s. It was, “Mother Can You Spare a Room,” by Jason Seiler, which won the Patrick Nagel Award for Excellence. I must admit I don’t follow illustration as much as I used to, so there were some unfamiliar names, but that doesn’t necessarily mean they were new to the illustration scene.

Greg Manchess had come out to speak to the Society of Illustrators San Diego several years ago, so I knew his work and his name. His painting of a cat in a space suit, “Major Tom,” was so loose and wonderful and different from the tighter illustrations I was used to seeing from him in National Geographic.

I’m always happy to see Bill Mayer’s work. They usually just make me smile, but he had a few darker pieces in the show that included Fragile Planet, Free Bird, and Smoke and Bones. They were very different from what I know of his work, so I checked out his website, http://www.thebillmayer.com. What a great site! You can see his sketchbook, along with a huge array of his illustrations. I always love looking at an artist’s sketchbook.

A few of the names I will be paying closer attention to in the future are Eda Kaban, Violet Lemay, Greg Newbold, Matthieu Forichon, Boya Sun, Marc Scheff, Greg Swearingen and, of course, April Mitchell. It’s so nice to see that illustration is moving forward, and April and I were both so inspired by the level of talent and dedication from each entrant. 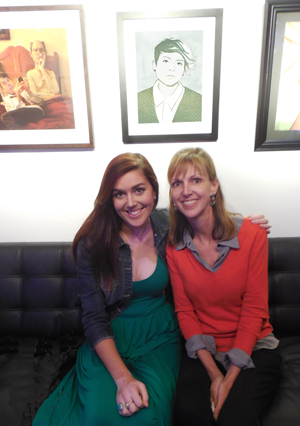 April Mitchell and Lori Mitchell under April’s entry, Tegan (from Tegan and Sara).