In December I went to up-state New York for a couple of weeks to work on a project.  While there I was beside myself excited that I would get to take a day to go down to the city to see the “The Original Art” exhibit of children’s book art at the Society of Illustrator’s.

Sadly, because of snow storm Elektra’s timing  it was not to be…sigh…I couldn’t begin to tell you how disappointed I was.

My friend and fellow artist Eunice, felt my pain and wanted to cheer me up, so on Sunday with the storm gone,  we hopped a train to the city where Eunice had arranged an appointment with Roger Reed at Illustration House.  Roger was kind enough to come down in the cold and open the gallery just for us and it truly saved my weekend.  They were getting ready for one of their bi-annual auctions so there was art hanging on the walls, leaning against chairs and stacked on tables.  An Illustrator’s heaven!

I had heard of Illustration House but never had the opportunity to go visit this fascinating treasure trove.  The owners are dedicated to the art and history of illustration, as their web site will tell you, and they have in their archives original works of the likes of Maxfield Parish, Norman Rockwell, N.C. Wyeth, and Charles Dana Gibson, to name but four.  There are also those I remember from when I was just starting out in the business, like Mark English and Bernie Fuches, Ted Coconis and caricaturist David Levine. 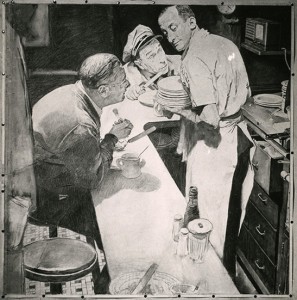 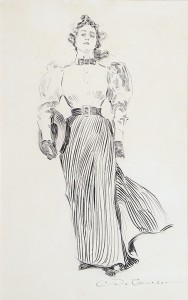 Charles Dana Gibson. Striding woman with hat under her arm, 1894. 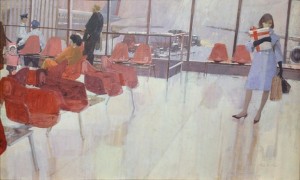 Much of the work had been created for magazines, books and various other publications.  There were works from the 1800’s, the 1920’s and ’30’s.  Some of it had notes in the margins… Roger knew the story behind nearly every work of art or was investigating it’s origin.  I could easily have spent the entire afternoon digging around…

I am sorry I didn’t get to see the exhibit at the Society of Illustrator’s but I am comforted to know that a select few pieces of the show will be touring the country and will be here in San Diego.  In the meantime I am able to add another favorite to places to visit in New York.  Thank you, Eunice!…and Thank you, Roger! 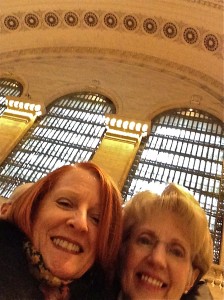