My daughter April and I went to see a lecture Nov. 14 by one of my favorite illustrators, Jeffery Smith, at SDSU. He is an instructor at Art Center College of Design in Pasadena, so his talk was geared towards the students in the audience. He had a nice crowd present. He showed a lot of process pieces. He was very open about his process, and even talked about how much he would get paid for several of the pieces. 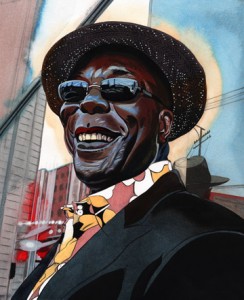 Jeffrey went to Art Center College of Design back in the 80s. Phil Hayes, the Illustration Department Chair at the time, was a big inspiration to him, as was the New York illustrator James McMullen. You can see the influence of both in Jeffrey’s own style. Jeffrey’s work is so distinctive that I am always able to instantly recognize it.

Jeffrey said one of the major turning points in his career was to illustrate an article about a murderer. He got a lot of attention from that and has been illustrating dark subject matter ever since. He said he felt almost comfortable illustrating these macabre subjects because of the gory tales he heard as a kid from his dad. 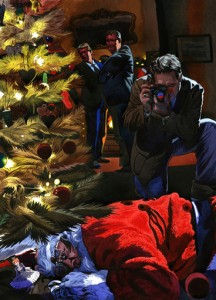 I really enjoyed seeing his process from starting sketch to finished illustration. His sketches were beautiful. He really knows how to draw and has a particular skill with the human figure. One of his instructors had told him anyone can draw a face, but what about drawing the figure? That stuck with him and you can see he has mastered the figure for sure. 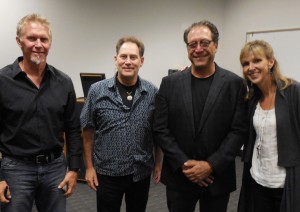 After his presentation, we had a chance to talk with him. He told us about how, shortly after graduating from school, he lived in New York. Just down the street from him lived Alan Cober (also one of my favorite illustrators). He wound up getting to meet and know many of the great illustrators from the New York area. What an exciting time!

If you would like to see more work by Jeffrey Smith check out his website at: http://www.drawger.com/jeffdraw/ He has a very impressive body of work. I hope you will be as inspired as I was.

President of the SISD